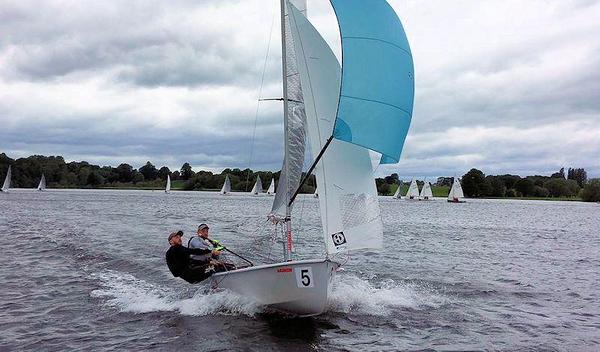 An impressive twenty-two GP14s assembled at the beautiful Budworth Mere to compete in the annual GP14 open meeting as part of the Northern Bell Series. There were seven travelling teams combined with a brilliant club fleet turn out including intrepid sailors who were experiencing their first ever open meeting. The racing offered challenges to all levels of sailor from the extremely talented, including four past winners of the event to the first timers, offering close and exciting racing for everyone.

All were welcomed by a warm cloudy day with a tricky patchy southerly breeze crossing the mere through trees in gusts and patches, building from light in the morning to medium strength as the day progressed. In the end gusting enough for the odd exciting three sail plane and to enable the early bath prize to be awarded to James and Judith, as they were caught out by an unexpected gust. It was one of those days that on one leg you would feel like a tactical genius and on the next that the world was against you as you yoyo-ed up and down the fleet.

But it was those skilful sailors, that kept the boat flat to be able to accelerate on each gust, always avoided being covered and had their heads out of the boats to search out the best wind that came to the front every time. There were quite a few teams with this skill, leading to an exciting event which went right down to the wire on the last race, before the worthy winners were to triumph.

John Chapman and Wendy Martin headed up the race team which provided three great races, taking the time to move marks to make sure beats remained competitive and timed races to perfection to enable us to start on time (after a bacon butty of course), and include a civilised lunch together with a cup of tea and bun for some between races 2 and 3. Lunch was a perfect pie,together with cakes and sandwiches, all served up by Vicky and her helpers with chilled jazz music playing in the kitchen to heighten that homely friendly atmosphere over which teams recuperated and chatted about the previous race.

Race one saw place changes galore throughout the whole fleet, at the front there were multiple leaders exchanging positions as they sort the best wind and best shift. Russ and Ali managed to take the bullet, from Graham and Ben who had worked through the fleet to take second with Sam and Andy third.

Race two started on its second time of asking after a general recall with Sam and Andy being able to pop out in front and lead from start to finish. But Russ and Ali showed their consistency to come in second. 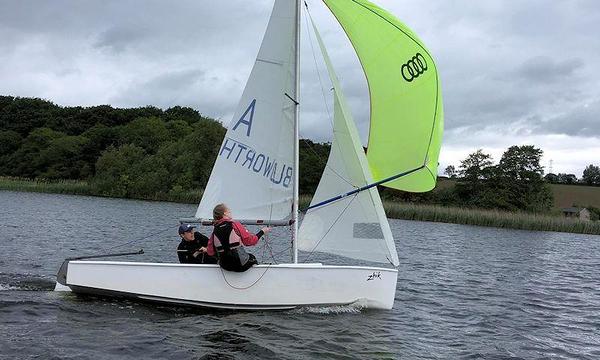 So, with two races to count, three teams could win the event going into the last race. The pressure was on and the superbly fast Sam and Andy decided to go for it and tack directly onto port moments after the start to attempt to cross the whole fleet for better wind, only to find the wind shifting and be caught port /starboard. There was a chorus of penalty leaving them no option but to do turns and putting them right at the back of the fleet.


Andy and Rebecca were able to steal a march on the fleet to win the race (and take third in the event) but Russell and Ali also sailed superbly again to get second and win the open meeting. Sam and Andy determined after their start miraculously were able to sail through the whole fleet to get third, so only one place behind Russ and Ali, and second overall. It was great drama at the front and there were numerous similar battles throughout the fleet.

Julie Waddington sailed a consistent event with Chris to take both the first lady and silver fleet prizes. Leo Burns and Alice Morris who have only been sailing for three years did a great job to win the bronze fleet prize in their lovely wooden boat.

The event was very generously supported by Tim Harper Boats, Creation Covers, Woodwind GRP and Adventure Dock who provided great prizes. Russell and Ali were popular and worthy winners, especially as Russell has been OD at the previous six Budworth opens, so is well overdue an opportunity to join in. A final word for David Morris, the GP14 captain at Budworth, who we owe a debt of thanks for doing a great job to prepare the day for all the competitors, but couldn't attend because his wife had arranged a surprise sun drenched luxury holiday in the Caribbean (close choice, but it was a great open meeting, David). 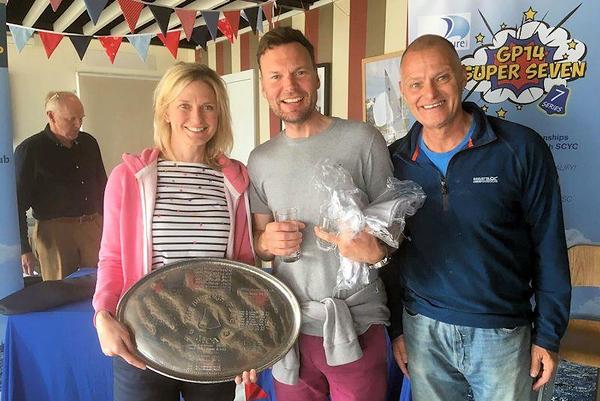 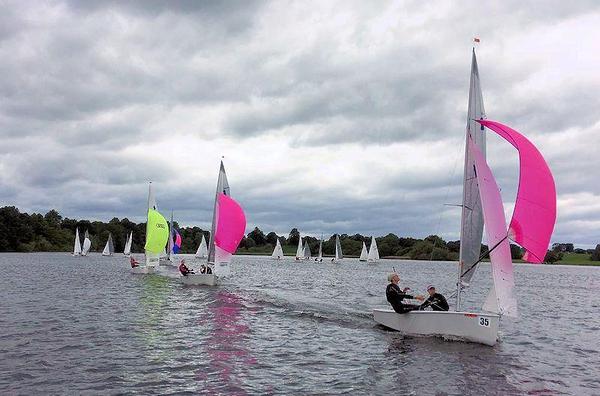