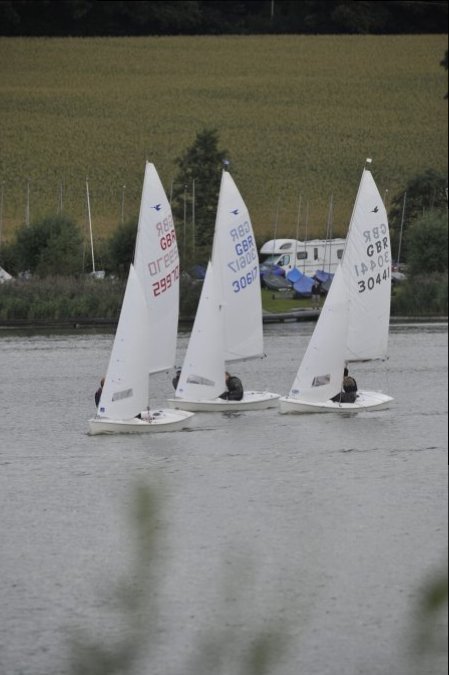 In the heart of rural Cheshire, Budworth Sailing Club hosted the SCIRA NW Championship where 22 competitors from the far Northern isles of Orkney to the southern corners of Devon & Kent.

Having won the first race, locals Mark and Tracy Antonelli in race two having gained an 80 boat length lead had it whittled away by Peter Wolstenholme and Sian Baird ending in a scrap for the line separated by a few centimetres. The 10 knots breeze held for the third race when Eric and daughter Eve Paalman stuck out form the start with hot on their transom Ian and daughter Charlotte Knight, the rest of the fleet lay in their wake as the two crews extended their lead to just short of a country mile by the finish.

Day two: The rain and flat calm dried up and filled in with 7knot by the start of the first of the day (race 4). Matthew Wolstenholme with Lloyd Roberts found their form leading to the finish from Richard and daughter Bonnie Marshall. The pressure built nicely to a more interesting 14 knots. After three winners from four races, it was Ian Gregory with first time Snipe crew George Holbrook who gained the lead on the final run as they benefited from a cheeky band of pressure that bypassed the three vying Snipes for the front. Antonellis took an ill-conceived tack having rounded the final mark in second let though the Paalmans as well as Ian and son Callum Marshall who pipped them for third on the line.

Wolstenholme & Roberts fuelled with Northern Pies for lunch popped out of the port end of the line of race 6 into higher pressure making the first mark in the lead which they held the whole race with the Paalmans marking up a consecutive second place.

Clean away at the second start the final race, Richard and Bonnie took an early lead that they held to the finish as the breeze of the day dropped steadily to a gentle 6 knots. Antonellis in fifth headed for pressure on the right of the final beat whilst those ahead went left. The final throw of the dice fell in favour of Antonelli who pulled up three places to take second but fell short by one point to the overall winners Wolstenholme / Roberts.

More than half of the crews were family partnerships which is a great characteristic of the Snipe fleet in the UK.