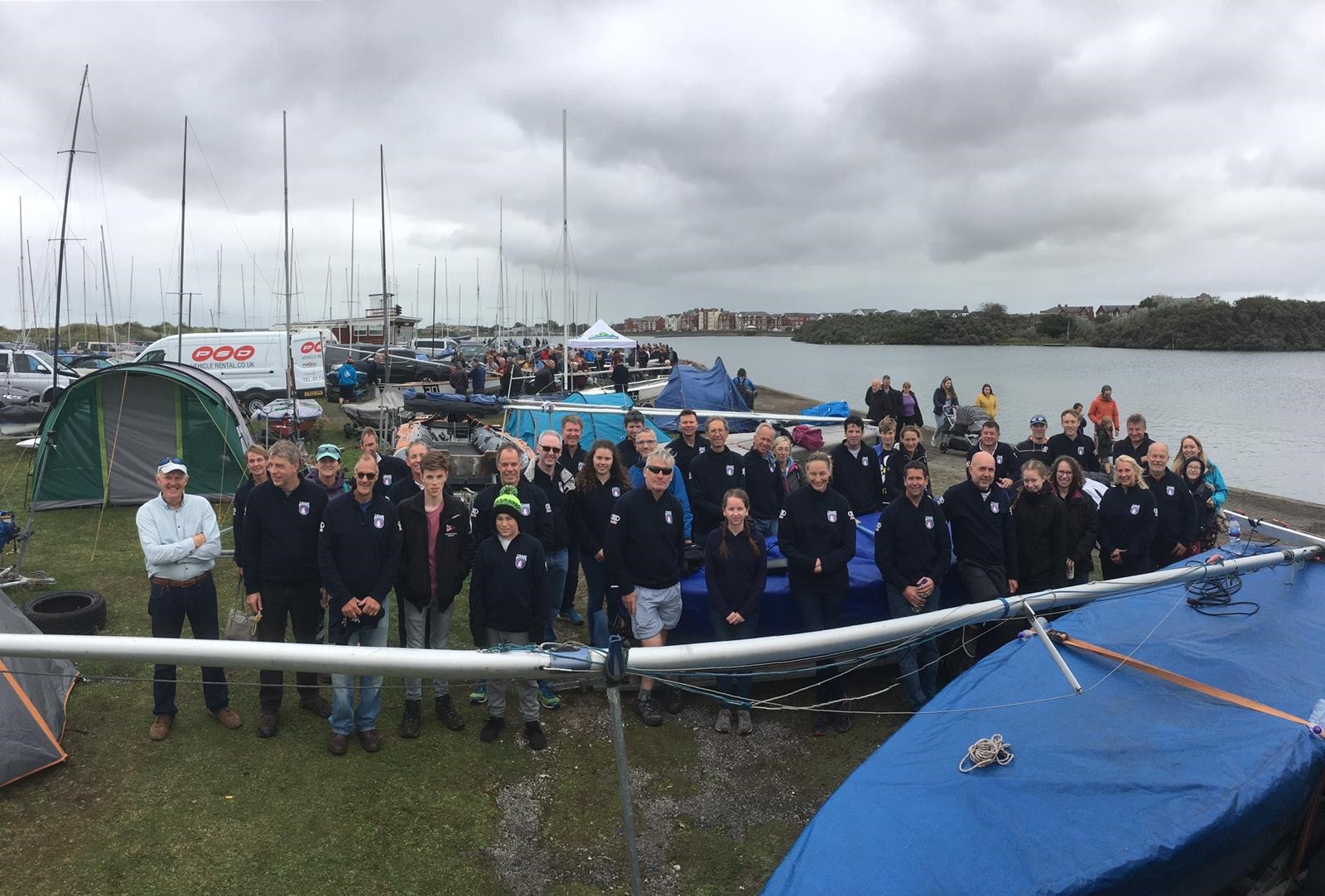 Budworth was proud to enter four teams, all sailing under the Budworth burgee, with club members as young as twelve taking part.

The weekend began with glorious sunshine, light winds and many spectators excited to watch the start of the race. Due to the A and B teams' exceptional performance last year, both boats crossed the line in flight zero as the cannon signalled the start of the race with the C team in flight one and the D team in flight two. Both the A and B teams along with South Staffs A team lead the pack on the downwind leg to the first mark. With such a fantastic start, could this be the year of the win?

In the early evening, Budworth's Prosecco party was as ever a roaring success; the crowds that gathered around the Budworth marquee could be heard from the water certainly making some sailors envious of the party atmosphere.

With the sun setting and the sky now glowing with various shades of pink, conversation quickly turned to the wind forecast. Anyone who had been watching the forecast over the previous week had seen it change from wild conditions to barely anything and back again. The question was would the now forecasted 29knots of wind blow though? Around 9pm we were teased with some slightly stronger wind; was this the a small taster of what could come? Who knew.

2am came and went with the forecasted wind not yet picking up. However at 3am, I think it's fairly safe to say that it was not all plain sailing as anyone awake would tell you; true to the forecast we were gifted (or cursed) with some rather fruity winds proving challenging for some teams. Only the brave flew their kites. For the C team, this was when some serious gains were made, Hugh and Michaela and Ted and Arianna kept the boat flat (and upright) sailing their team from a position in the forties up to a position in the low thirties. I am told that in the B team Martin and Sian had a very close look at the centreboard at one point but still managed to stay upright! For some teams, the interesting conditions combined with the lack of light proved to be a step too far as a number of capsized boats kept rescue on their toes. It was certainly a new experience for me (Michaela), competing for the first time in the race, guiding my Dad around capsized boats in the dark.

When the sun rose, the exciting breezes of the night were now a memory as the conditions were similar to Saturday minus the sun but with the addition of some drizzle. With only hours of the race remaining, could the A team overtake South Staffs A team to win the race? Could the B team maintain their position and win the Masters?

Arguably, the real star of the event was the D team's Rosanna Joyce. With just two minutes of the race left, she tacked back and forth meters back from the finish line. Over the tannoy, the much awaited ten second count down began as Rosanna and her crew, Olivia, made their way towards the finish line. Rosanna and Olivia were the first team across the finish line to the sound of great cheering from team Budworth.

After Ted's team debrief on the "Stage" that was the tail lift of the van, team Budworth gathered in the marquee for the prize giving.

South Staffs A team took first place and Budworth A had secured second place, a fantastic result especially after having to replace a broken spinnaker pole during the race. Despite a broken rudder costing the B team a couple of minutes, they came in a respectable 10th place and are pleased to retain the Masters trophy. Jon, the B team captain has added that every team member sailed well and gave 110% and we, as a team are very proud to be a part of team Budworth. Bring on 2020!! The C team finished in 33rd place and the D team in 56th; results for all to be proud of.

Of course, it would not be possible for team Budworth to compete in this year's race without an enormous amount of hard work behind the scenes. Thank you to Hermione and Danielle for covering the catering over the weekend, providing breakfast at 7am and keeping team Budworth fed and watered. Ali's fantastic carrot and coriander soup, Bill's hearty sausage casserole and the flapjacks, Eccles cakes, and chocolate brownies supplied by Martins Bakery kept us all full of energy over the weekend. Chris and Katie, the team managers, did an excellent job of overseeing the whole race keeping record of each teams lap times for the whole 24 hours. Thank you to Katie for organising the team Budworth tops and to our sponsors, Preston Audi, for their continued support as without this, the success of the A team would not be possible. Without Bill's infectious enthusiasm and effort, there would be no team Budworth. Thank you to everyone who was involved and those who supported team Budworth.

As we pack up from this year's race, there's one question on everyone's mind; could 2020 be the year of the win?