Over the first weekend in July 9 Budworth boats competed in the 60th Lord Birkett Trophy Event on Ullswater in the Lake District. It's so highly rated that Yachts & Yachting put it at No. 8 in the sailing events you must do! The race course is the full length of Ullswater from Pooley Bridge to Glenridding, rounding Norfolk Island to Port and back, around 15 miles (without any tacking or gybing). The race commemorates Lord Birkett speaking in Parliament in Feb 1962 and getting Manchester Corporations Water Bill thrown out which would have seen the termination of all boating and public access to the water closed down and a reservoir created. 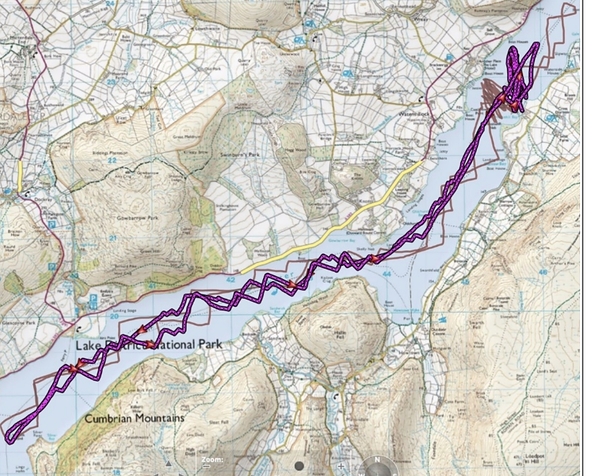 The Budworth fleet comprised of 1 Fireball, 2 GP's, 1 RS400, 5 RS200's, 15 budworth sailors plus our commodore in a technical support role! Alistair Coates won the event in 2021 and has competed in it over a number of years but for most of the rest of us it was our first experienceand what an exciting experience it was!
After a rather damp Friday evening, for some of those under canvass, we awoke to a brisk Force 4 to 5 south-westerly breeze on the Saturday morning. The start line, despite being the full width of the lake was packed some 3 deep with 160 boats of all shapes and sizes ranging from 49er's (PYR 697) to Miracles (1194) and included cruisers.
Not all boats survived the startbut all Budworth boats got away cleanly although Russ and Ali Cormack were seen, shortly after the start, trying to cross the fleet on port in their Fireballa very high risk manoeuvre! Once getting through the start we embarked on a 7 mile beat into very choppy waters, often with a boat full of water, trying to keep a clear lane and always on the look out for "right of way" boats. Luckily, I'd like to think skilfully, we all got round the course with the exception of Dave Morris and Dan Hambleton who suffered forestay issues after doing all the hard work to get to Norfolk Island.
Sunday was a repeat of Saturday, but fortunately the wind was down slightly. Just for a little more excitement we had 2 general recalls and a black flag start. All budworth boats completed the race. The results were dominated by the fast boats with Dylan Noble winning in a Musto Skiff to match the achievement of his father in 2000's and grandfather in 1974.
From Budworth, Alastair Coates & Steve Tylecote finished 10th in an RS400, Hugh Devereux and Malcolm Bird 35th (and also 1st GP14), Russ & Ali Cormack 40th in Fireball, Evie Coates with cousin Ben Tylecote 47th in RS200, Kevin Gerald & Bex Smith 62nd, Jon Chapman & Wendy Martin 65th, David Grice with hired in pro helm James Penty 92nd, Tony Wilcock & Mhairi Gass 107th all in RS 200's and Dave Morris & Dan Hambleton 147th in a GP14.