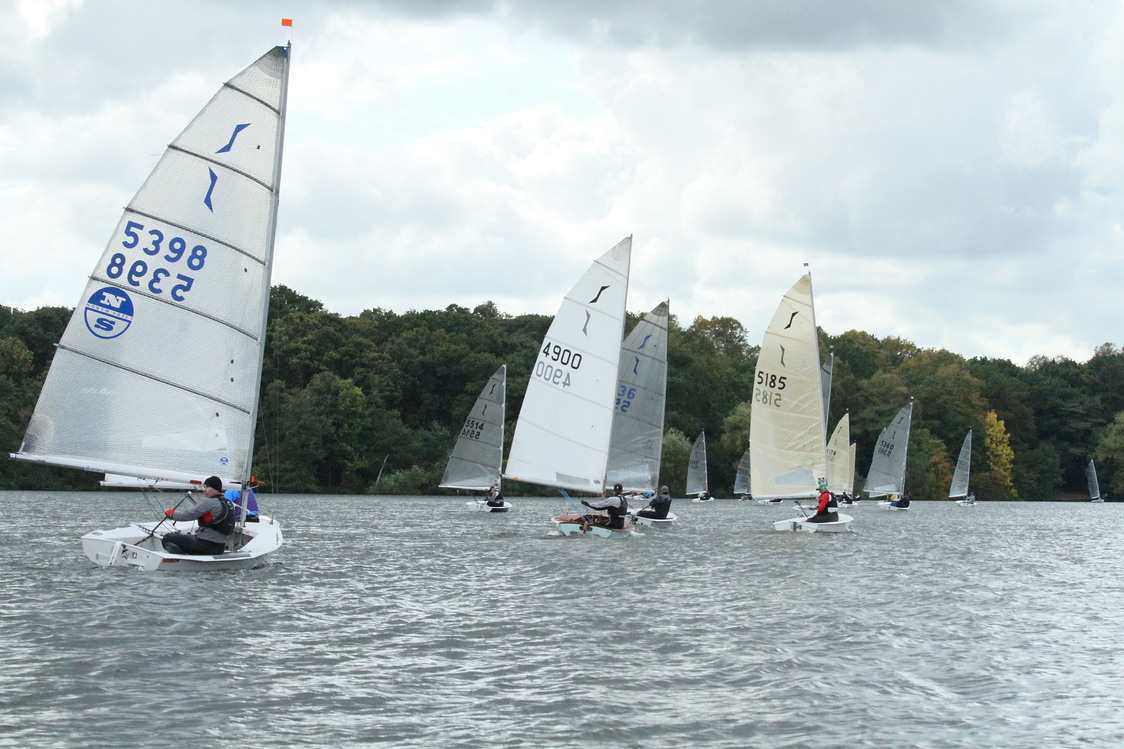 A total of 138 competitors sailed in 12 events, in the closely fought and highly enjoyable Solo Northern Series, which came to its finale on the 6th October 2018 at Budworth Sailing Club. It went right to the wire with either Steve Denison or Steve Graham still being able to win as they went into the last race.

The chill of autumn was just starting to bite with a flock of geese coming together on the beautiful mere to welcome the 16 visitors to Cheshire's Budworth SC, one travelling an impressive 270 miles from Salcombe to compete. With 12 home boats, some sailed by hot shots from other Budworth fleets it made an impressive start line of 28 boats (typical for the series). It was going to be close competition throughout the entire fleet.

The glamorous race officer team of Ali and Katie ably assisted by Bill with his special perpendicular tie wrap burgee set some great courses and good start lines, which was a very tricky job in the light shifty northerly breeze which veered to the east as the day progressed. With only one recall the dreaded black flag was never produced but this didn't stop the fleet being on the line on time, eager to get that early break to get out into clear air. With the wind coming over the trees there were big gains to be made by following the shifts, keeping in the stronger breeze and avoiding the calm spots.

In race one Budworth's Luke Shaw, who had just joined the fleet and recently creating a stir by winning his first open at Leigh and Lowton pushed out to the front but couldn't hold off the fast Tim Sadler sailing his beautiful wooden solo to win race one.

Back for warming and delicious chilli carne cooked by Alison and her team, the racers recharged returned to the mere for the last two back to back races of the series. As the wind filled in a little and changed direction the race management team held back the start until a more stable breeze held. In the 2nd race it was head to head with one and two from the series demonstrating their consistency by battling it out for one and two in the race, with Steve Denison winning out.

Now it was all on the last race with both Steve's close together again but this time it was Yorkshire dales, Tim Saddler again out in front showing his mastery of lake sailing and winning the last race to take the Budworth open. But who had won the series, with such a close series there was a long count back so it wasn't clear.

The warmth of the bar and a well-earned beer for some was the venue for the prize giving for the events. All was revealed as the kindly donated prizes from Winder boats were handed out by the series organiser Phil Barnes for the 14 qualifiers. It had been a great series with numbers up and everyone agreeing the joint midland meetings at Carsington (2 consecutive events) Notts and Ogston being a great success. For big fleets, great venues and a friendly competitive racing throughout, this is a fantastic series to sail in. As to the winner, Burwain's Steve Graham had been able to retain his slim lead going into the last event and is this year's champion. And finally, a surprising result, showing the importance of qualifying, was the club prize for the best three results from a single club was narrowly taken from the three times back to back winners Burwain by Budworth (Phil Barnes, Ted Garner, Mark Cleary) – a popular call at the Budworth bar!