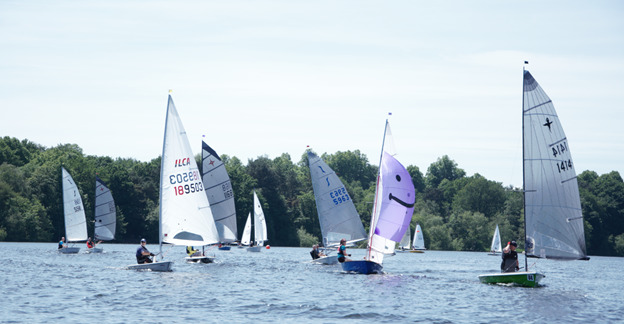 A large new flag celebrating Budworth Sailing Club's 75th year slowly flapped in gorgeous sunshine at the entrance to the Cheshire club, to welcome a great turnout of 11 visitors and 8 Budworth members, on Tuesday the 8th of June. Yes, a Tuesday, it was the very first Border Counties midweek series, set up using a similar format but without the age restriction to the successful North West Senior Travellers Series (NWSTS), to enjoy super friendly dinghy racing for all abilities, on a "school day", with dates chosen to compliment the NWSTS so sailors can double up on midweek fun. Employers can be relieved as unexpectedly not a single competitor asked for the "wifi" code, so no one could be accused of working from the sailing club.

The bottom of the access lane opened to an immaculate and beautiful Budworth mere with a lovely blue lake showing patches which rippled in the sun and other occasionally glassy areas as the light southerly wind strengthened then weakened and found its way through trees as it intermittently flicked to the west. It was going to be one of those challenging days for the PRO and competitors, with the leaders being those who could master the conditions to find clear air and the best pressure.

An impressive fleet rigged with a wide variety of boats from five clubs with Supernova's (from Winsford), Solos and ILCA (Lasers) making the largest classes. Double handers were of course limited as we were still in the pandemic and unfortunately Budworth could only offer a lawn and toilet facilities as everyone observed Covid restrictions paying the nominal entrance fee of £5 by card.

At the briefing, the Budworth Commodore Bill Kenyon welcomed sailors and Dave Turtle the event organiser thanked all the 19 competitors for supporting the new series, then it was to the water for the brilliant PRO team headed by Jon Chapman to set the first of the figure of 8 courses.

Amazingly he was able to set a course with two beats and the fleet got away with three boats, a Laser, Solo and Supernova managing to break free from the pack. The lead places and those through the whole fleet kept changing as each plotted courses to make the best of the wind and being alert to swings in wind directions even requiring a tack on the run for the leaders. With silky smooth sailing skills Pete's (Coop) Supernova was the first across the line followed by Dave's Laser and Phil's Solo.

So, to lunch, a picnic on the front lawn, a chance to enjoy the warmth, catch up with and make new friends, as everyone mused over how to make the best from that tricky summer wind.

Back to the water for two back to back races. Again, a figure of 8 course with super competitive starts to try to get clear air. Three boats, this time Dave's Laser, Pete (Chambers) Supernova and Hugh's RS200 managed to do just that, to emerge at the front. These three boats enjoyed the best value for money by sailing three laps (with average lap times), to the rest of fleets two, but sadly despite sailing brilliantly Pete missed the gate on one of the beats. Just behind Dave and Zara's Miracle was showing brilliant consistency as she flew her smiling spinnaker to great effect.

With different winners in races one and two it was all on for the final race, which was also had the most variable conditions with gradient wind fighting a distant sea breeze. The first start was abandoned due to a massive wind shift, the second also stopped with an eager fleet and puff of wind causing a general recall, until 3rd time lucky the fleet got away. Hugh's RS200 prospered and managed to just keep ahead around the course but very closely followed by the expert sailing from Phil in his Solo.

The handicaps were calculated, boats put away and a welcome pint served on the lawn to discuss what had been a great Tuesday, even without perfect wind conditions. There were three prizes awarded and the results could not have worked out better, in third overall and winning the double hander bottles of wine were Dave and Zara Turtle (Shotwick Lake), with Dave Nicholson in his Laser taking second overall and the Budworth bottle of wine, and finally well done to Phil Snewin (Chester) for winning the event (and bottle of wine) in a Solo, which he admitted he was sailing for the first time (impressive !).It was perfect as Phil let everyone know the next event is at his home club of Chester to enjoy a great river racing experience, again on a Tuesday, this time the 29th June 2021. See you all there and please spread the news.