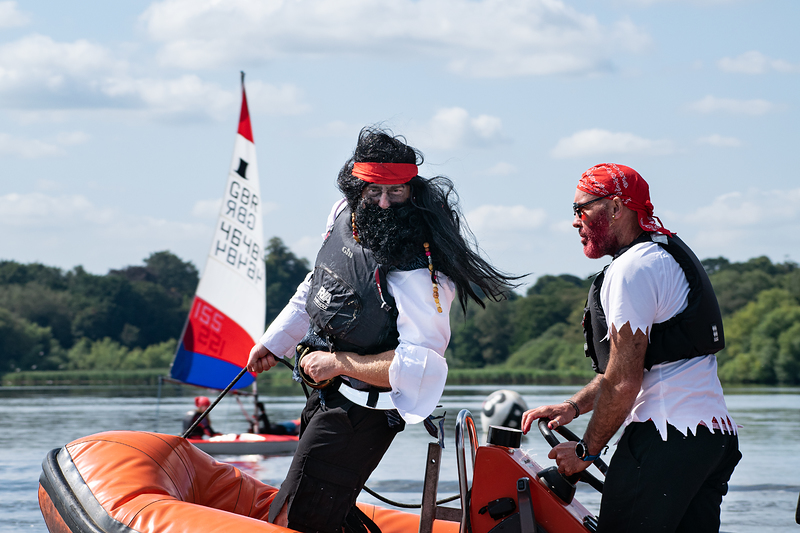 What an extraordinary month we have just experienced. Someone summed it up when they described it to me as "Feeling the buzz back in Budworth"!

Wednesday 1st September concluded this year's very popular midweek series. Twenty four entries pursued each other in a nip and tuck, one hour race, skilfully managed by Mark Philpot. Close racing was seen right up until the finish, with the eventual winner being Ted Garner in a Solo. This brilliant evening of round the cans racing was rounded off with a complimentary slice of Pizza and prize giving in the bar afterwards.

Caribbean like weather conditions saw a number of unwary sailors walking the plank on Commodores Saturday, the 28th August. A massive big thank you to Red beard and Black beard who fabulously entertained over forty jolly juniors with wonderfully ingenious games, on, off and in the water, throughout the day. Great fun was had by all those shipmates basking in the glorious sunshine and balmy waters of the day.

Definitely not a scurvy crew

Never before, in the club's seventy five year history, have we seen one hundred and eight five people attend a Commodores weekend evening function. A huge thanks goes to all those hot hands who flipped burgers to feed the hungry revellers and to those who ably assisted in serving libations. It was a hot evening made even more spectacular with the assistance of the crew who fed the bonfire, let off the fireworks, and entertained us late into the night. Once again, it wasn't the rum but 'Elephant Juice' that brought us all to our feet in the heat of the night. Certainly a 75th Anniversary social event not to be forgotten in years to come.

Sunday dawned with forty eight boats on the water competing in the Commodores Regatta, all trying to claim the clubs highly prized annual silverware. Congratulations to all our winners, the final results for the day were:·

On Bank Holiday Monday, 30th August, Budworth Sailing Club flew its flags and opened its doors to members of the public. Enticed by the new road side posters, in-excess of two hundred and thirty people visited the club to watch our festival of sail. Having participated in sailing joy rides, over sixty new members joined with thirty signing up to Learn to Sail courses there and then on the day. A massive big thank you to our very own vice commodore Hugh Attfield for organising such a hugely successful day.

The club is inviting all its members to a Special General Meeting on Monday 20th September starting at 7.30pm in the clubhouse. The purpose and subjects of this special meeting are to cover:

Since the conception, the rules of 1968 were fully revised in 1994 and 2012, when a version was approved which made the club an "Open Club" to comply with new legislation. Since this time electronic communication, Health and Safety and Safeguarding issues, to name but a few, have changed the way we need to operate.

The Committee therefore appointed a sub group to review every aspect of our rules to bring them in line with modern times and legislation, whilst maintaining the values and traditions of the club, which will stand for many more years to come. Members are invited to consider these updated Rules and are urged to adopt and approve them at this meeting.

Following the successful completion of work last year to create the Eastern Dinghy Park, members are also invited to approve the balance of remaining improvements, necessary to realise and complete the vision for Budworth SC that was outlined and agreed upon at the 2019 AGM. It is proposed

This all amounts to a major project for the future of the club, for which, the committee requests further approval from the membership at this meeting to enable it to proceed to completion.

Budworth Sailing club is currently bucking the trend of many other similar organisations. Members are commenting on the extremely good feel factor they are experiencing at our club at the moment. Never before have we seen such a huge increase in new members, such a highly active Junior coaching regimen, continual waiting lists for each new Learn to Sail course, quality Fleet racing and high Raceboard activity. Your committee has decided that the excellent work being done by so many voluntary members of the club in so many different capacities should be publicly recognised. Budworth Sailing Club is applying for consideration as the 'RYA / Y&Y Club of the year'. Watch this space to see how we fare against other sailing club entrants from around the country.

Wishing you all great joy and success throughout this month of celebrations and racing.